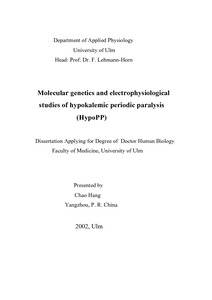 Hypokalemic periodic paralysis (HypoPP) is an autosomal dominant muscle disease characterized by generalized flaccid muscle weakness associated with hypokalemia. Mutations in the voltage sensor segments of the L-type skeletal muscle calcium channel, R528H, R1239H and R1239G, were identified for HypoPP-1. Genetic heterogeneity was reported in some HypoPP families without calcium channel mutations. The aims of this study were to identify novel HypoPP-causing mutations and to clarify the electrophysiological results on HypoPP-1 mutations. All gene regions encoding the transmembrane segments of the calcium channel were screened by single strand confirmation analysis. Sodium channel was also selected as additional candidate gene for screening owing to its function in generating the action potential. In calcium channel, no new mutation was found, while in the sodium channel three novel HypoPP-2 causing mutations were identified. Slight clinical differences were observed between HypoPP-1 and -2 in our genotype and phenotype studies. Electrophysiological measurements of HypoPP-1 mutants were performed on the rabbit cardiac calcium channel homologue. Three single mutations and two double mutations were studied. Reduction of current density and voltage sensitivity were the two physiological effects found in common among all mutants. These two effects might indirectly disturb the propagation of action potential, and result in paralysis. These results are consistent with the changes found in HypoPP-2 mutants of the sodium channel. These showed enhanced inactivation and reduced channel density, which directly reduce the action potential amplitude, slow the muscle fiber conduction velocity and result into paralysis. Since slowed muscle fiber conduction velocity was also observed among HypoPP-1 patients, this suggested that calcium channel mutations might finally disturb sodium channel function, thus producing the phenotype for both types of HypoPP.