Biomechanical characterisation of a potential material for meniscal replacement 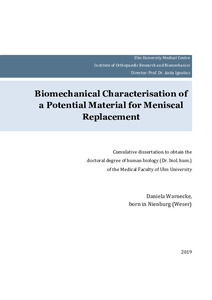 Among different research approaches to replace an injured meniscus, a silk fibroin scaffold for partial meniscal replacement has been introduced showing promising results in terms of biocompatibility and chondroprotection experimentally in vivo. Basic requirements for meniscal replacement have previously been postulated, stating that a replacement material should resemble the biomechanical properties of the native meniscus as close as possible. Based on these specifications, the present study biomechanically characterised a materially optimised version of the mentioned silk fibroin scaffold. A first in vitro study comprised the comprehensive evaluation of the biomechanical material properties as well as the structural composition of the scaffold to address the question: “Does the silk fibroin scaffold biomechanically meet the postulated requirements for meniscal replacement?” Comparing the obtained results to the material properties of the postulated requirements as well as of native meniscal tissue, it could be shown that the silk fibroin scaffold displayed an adequate mechanical competence, which is important to distribute loads over the articulating surfaces already in the initial phase after implantation. However, the achieved compressive stiffness was in excess of native meniscal tissue, which may impede tissue ingrowth and can additionally cause damage of the underlying cartilage in vivo. A new fibre mesh, which was integrated into the porous matrix during the material optimisation process in order to enhance surgical fixation in vivo, could have led to this increased stiffness. However, this new fibre component could not provide tensile strength comparable to that of the native meniscus. Especially for larger meniscal defects, the scaffold could be improved by modifying this fibre component to better mimic the circumferentially orientated collagen fibres of native meniscal tissue. Adjusting the additionally obtained structural parameters, like distribution of the pore-walls as well as their thickness, could be an option to reduce the material’s compressive stiffness, thereby imitating native meniscal tissue more closely. To prevent wear, an adequate replacement material should exhibit next to its competent behaviour under compression and tension, friction properties comparable to meniscal tissue. Therefore, the question arises “Does the silk fibroin scaffold exhibit friction properties comparable to that of the native menisci?” Within a friction study, the scaffold revealed significantly higher friction coefficients in comparison to that of meniscal tissue but still within the range of the postulated basic requirements when tested against articular cartilage. Additionally, it could also be shown that glass, which is typically used as opposing surface in cartilage friction studies, always led to significantly higher friction coefficients. This emphasizes the importance of choosing an appropriate material as opposing surfaces to obtain relevant friction coefficients for joints. This in particular applies to friction analyses of future meniscal implants in order to assess whether they ensure long-term chondroprotective function from a tribological point of view. During activities of daily live, e.g. normal walking, the axial loads as well as the velocities of the femoral and tibial surface vary considerably within the knee joint. Consequently, it is questionable if static friction studies as they are typically performed, also within the prior friction study, reflect the conditions occurring in vivo. Hence, the question arises, if friction within the knee joint and especially of the artificial material for meniscal repair is affected by the varying conditions physiologically acting during gait. Therefore, the subsequent study investigated the friction behaviour of the silk fibroin scaffold as well as of the articulating surfaces within the knee joint under testing conditions characteristically occurring during gait. Using a new dynamic friction testing device, both cartilaginous tissues, meniscus and articular cartilage, revealed statistically higher friction coefficients during the simulated low-loaded swing phase than during the high-loaded stance phase. This suggests that static testing methods can rather underestimate friction coefficients. Consequently, the second friction study additionally emphasises the relevance of testing under physiological loading and motion conditions. In summary, although the characterised silk fibroin scaffold partly meets the basic requirements for meniscal replacement materials, further improvement are necessary to mimic the remarkable material properties of the native meniscus more closely, thereby enhancing its chondroprotective function in vivo.