Multiphoton interference and the computational complexity of linear optics 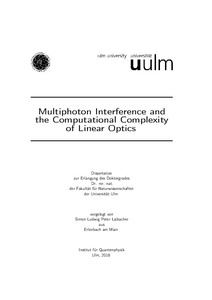 The non-classical interference undergone by multiple photons in passive, linear optical networks gives rise to a surprising computational power of such quantum systems. This is prominently highlighted by boson sampling, a scheme for quantum computation which relies solely on such multiphoton interference and omits the usage of more sophisticated techniques such as entangling gates or feed-forward control. Despite these limitations, it still allows to efficiently solve a class of computational problems which is intractable for classical computers. In this thesis, several open challenges on the way to an experimental realization of boson sampling are addressed. To that end, the idealized model for boson sampling is extended to account, for example, for inner degrees of freedom of the single-photon pulses or the probabilistic nature of single-photon sources. It is shown that the difficulties arising from these real-world effects can be overcome by suitably adapting existing boson sampling schemes. Additionally, the extended model for such interference is applied to reveal its intricate dependence on input state, evolution inside the interferometer, and the detection process. Finally, a novel description of SPDC in terms of temporal Bogoliubov transformations is provided, revealing new, intuitive insights into the temporal structure of photon correlations for such sources.