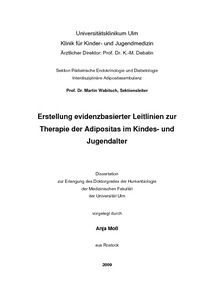 Background: Guidelines can provide orientation, help for medical decision processes, and science-based, practice-oriented recommendations. Obesity in childhood and adolescence increased in the last years worldwide. Guidelines for treating obesity in childhood and adolescence in Germany were first published by the workgroup "Obesity in Childhood and Adolescence" (AGA) in 2000. The aim now was to gradually amend and replace this consensus-based (S2-) guideline with an evidence-based (S3-) guideline. Methods: After a systematic computer-based literature research (keywords, Medline, 1988 - 2006) and literature selection and validation, a first text draft was composed on the basis of the core messages of the sighted literature. Within multiple feedback and consensus steps, the text was revised and consensus for the recommendations with included recommendation grades was achieved via a moderated so called "nominal group process". Results: For this guideline, consensus was achieved for a total of 23 recommendations. The detailed description of the classification of consensus strength can be gathered from the methods report appendant to this guideline. During development of this guideline, it was noticed that the number of patients employed in therapy studies is high. However, some of these studies have methodical deficiencies. The achieved results show that bodyweight and body fat mass are significantly influenceable with conventional behaviour-based measures and also with the current available drug therapies. However, the extent of the achieved weight reduction is rather small. In contrast, surgical measures are very successful in reduction of bodyweight. However, this is an unproved, experimental therapy which can only be considered as "ultima ratio" in special selected patients. The guideline with appendant methods report can be retrieved both on the homepages of the AWMF (www.awmf.org) and of the AGA (www.a-g-a.de).