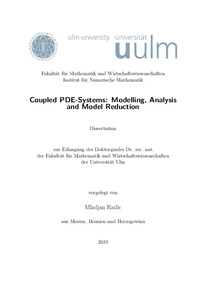 The description of scientific phenomena by mathematical models by (parametrized) partial differential equations (PPDEs) often lead to highly time consuming problems. Though, these type of problems have to be solved and evaluated often and rapidly, desirably in realtime, for slightly varying parameters. The idea is, to approximate the underlying PPDE by a low-dimensional reduced model. The so called reduced basis method (RBM) has become an established and efficient method for the reduction of such models. In this work, the modeling of catalytic converter is considered. This leads to a highly coupled nonlinear time-dependent and stiff problem. The exhaust gas species Xf will flow through so called channels, modelled by a transport equation. These gas species reacts with the species on the surface Xs of the so called washcoat, receiving a diffusion reaction equation and the surface is the coupling boundary. The loading on the surface , important for the chemical reactions is modelled by an ODE. The inlet concentration of the gas species as well as the initial concentration is considered as the parameter, which may vary. The model of the catalytic converter motivates the study of coupled systems. Therefore, a linear coupled system, where two domains are coupled through an interface is derived. On the first domain, a linear transport equation is considered. On the second domain, a linear diffusion reaction is considered. The focus here is to impose the right boundary conditions, the well-posedness of the problem and how to apply the RBM. This model shall mimic the catalytic converter. In fact, some already known limitations of the RBM are revealed and enlighted with the help of the linear coupled system. One of these limitations is related to the estimation of the error between the full order and reduced model. Another approach is introduced for the RBM, namely the hierarchical error estimator. This new error bound is applied first on two different PPDEs. Its advantages and strength as well as its limitations and drawbacks are discussed and illustrated by these two problems before being applied on the coupled system.