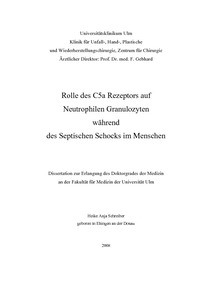 Role of C5aReceptor (C5aR) on Neutrophils (PMN) during septic shock in humans: During experimental sepsis in animals, excessive generation of Complement 5a (C5a) and reduced binding on neutrophils (PMN) has been shown resulting in an impairment of the innate immune system with often lethal complications. To assess these results in humans, the present study analyzed complement status (levels of C3a, C5a and MAC) by Elisa and complement function by CH50. PMN function was assessed by detection of H202 production. C5aR expression and C5aR content of PMN were determined by Flow cytometry and Western blotting. A new technique for the detection of a so far unknown circulating C5aR (cC5aR) was developed. As a result patients with septic revealed an excessive generation of C3a, C5a and MAC and a significant reduction of complement function. The loss in complement function correlated with the outcome. PMN function was also significantly reduced in patients with septic shock also failed to distinguish between survivors and non-survivors. C5aR expression and C5aR content of PMN were significantly reduced during septic shock, especially in non-survivors. The loss of C5aR on PMN surface and lysate led to a discovery of a so far unknown circulating C5aR (cC5aR) in the sera. cC5aR levels were significantly elevated in patients with septic shock, especially in non-survivors. Using Roc analyses, C5aR and cC5aR were both reliable parameters to distinguish between survivor and non-survivor. In vitro incubation of PMN from healthy volunteers with CRP led to downregulation of C5aR expression and upregulation of cC5aR in the sera. Interestingly during septic shock sera CRP levels correlated with C5aR and cC5aR levels, thus indicating a crucial role for CRP in the regulation of C5aR and cC5aR. The data suggest that C5aR and cC5aR play a key role in the development and progression of septic shock in humans.