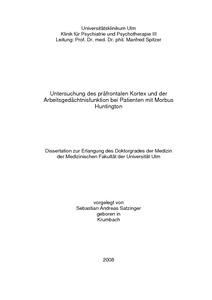 Huntington"s disease (HD) is an autosomal dominant inherited neurodegenerative disorder characterized by a trias of motor, psychiatric and cognitive dysfunction. The aim of this study was the exploration of the functional neuroanatomy of the working memory (WM) in patients with HD by means of event-related functional magnetic resonance imaging. Using a parametric verbal WM task containing different WM load levels we analysed cerebral function during WM performance in healthy control subjects (n = 16) and HD patients (n = 12). On acount of the applied event-related mechanisms we were able to exclude incorrectly performed trials to control accuracy-related confounders. Voxel-based morphometry was used to control for confounding cortical and subcortical atrophy in the patient group. In comparison with healthy controls, HD patients showed slower and less accurate reactions across all WM load levels. Looking at the functional data, HD patients showed lower activation of a wide network including the left dorso- and ventrolateral prefrontal cortex, the left inferior parietal cortex, the left putamen and the right cerebellum at high WM load levels only. Although voxel-based morphometry revealed significant grey matter differences in the bilateral caudate nucleus and the thalamus, as well as in inferior parietal and lateral prefrontal regions, grey matter reduction in the patient group did not affect the activation differences obtained during WM task performance. In conjunction, these findings point to aberrant cortical functions of HD patients in special working memory related curcuits. Potentially a breakdown of these functional networks is the neurological basis for cognitive deficits and conduct disorders of the HD.