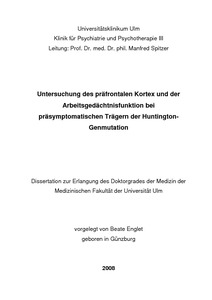 Huntington"s disease (HD) is an autosomal dominant inherited neurodegenerative disorder that is characterized by progressive motor dysfunction, psychiatric disturbances and cognitive dysfunction. The earliest manifestations can be investigated in subjects who carry the HD mutation, but who remain presymptomatic for the motor disturbances (pre-HD). There is growing evidence that especially cognitive function is impaired in pre-HD subjects, predominantly involving the working memory (WM). The objective of this study was to investigate the functional neuroanatomy of verbal WM in pre-HD subjects. By means of event-related functional MRI we studied healthy controls (n = 16) and pre-HD subjects (n = 16) with a parametric WM paradigm comprising three different WM load levels. Based on the estimated proximity to manifest motor symptom onset pre-HD subjects were assigned in two subgroups close and far from predicted onset. Voxel based morphometry (VBM) was used to control for potentially confounding brain atrophy. Although WM performance did not significantly differ, pre-HD subjects exhibited a significantly decreased activation of the left dorsolateral prefrontal cortex (DLPFC). This region was not affected by early cortical atrophy as revealed by VBM. Pre-HD subjects close to the onset of motor symptoms showed an increased activation of the left inferior parietal lobule as well as the right superior frontal gyrus. In addition, the activation level in the left DLPFC was positively correlated with the UHDRS cognitive subscore, suggesting that left DLPFC function may represent an early neurobiologic marker of neural dysfunction in pre-HD subjects. Suggesting that even in the presence of abnormal prefrontal activation pre-HD individuals were able to maintain normal cognitive performance, increased parietal as well as superior frontal activation seems to be a compensatory mechanism with closer proximity to the onset of manifest clinical symptoms.