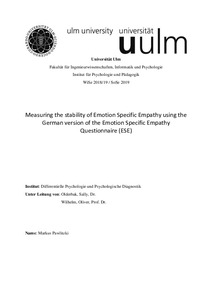 Knowing what another person is feeling and feeling that same emotion too is what empathy enables us to do. However, since there are various different emotions, the question becomes if we feel the same empathetic response when observing happiness and sadness in someone, for instance, or if our response differs. The emotion specific empathy questionnaire (ESE) differentiates our empathetic response to 9 different emotions: Anger, fear, sadness, happiness, disgust, surprise, relief, pride, and contentment. In this paper we wanted to find out, if on the one hand empathy as a whole and on the other hand our emotion specific empathies remain stable across time. We also wanted to know if there are differences in stability between the emotional empathies. For that purpose, we recruited 117 predominantly younger, white, female and educated participants who filled out the 90 ESE items at two different times three weeks apart. Our results support previous findings and our expected hypothesis that empathy as a whole remains stable. The emotion specific correlations differ quite a bit. Their correlations range from .64 to .99. The lowest correlation has been found for the disgust specific empathy, while the highest correlations were observed for pride and relief, followed by surprise and contentment.