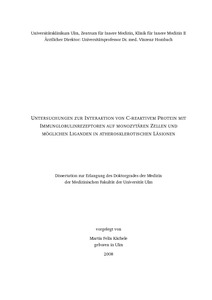 C-reactive protein (CRP), the prototype of human acute-phase protein, is considered to be a potent cardiovascular risk marker. However, its active involvement in cardiovascular disease is being controversially discussed. Fc-receptors (FcR) for human immunoglobulin G seem to be the main candidates for binding to cells; a specific CRP binding has been shown for Fc-gamma-RI and Fc-gamma-RIIa. Previous works on CRP showed inconsistent results for a CRP binding to low-density lipoprotein (LDL), a key-player in cardiovascular disease. By using ultrasensitive confocal fluorescence live-cell imaging, this work wanted to show 1) whether CRP binds also to Fc-gamma-RIII, 2) which receptor is the most important one for CRP binding to macrophage-like cells and 3) if there is any interaction between CRP and LDL. METHODS: For Fc-gamma-RIII binding studies, overexpressing receptor-transfected, COS-7 cells were used; as a model for macrophages, this work compares the cell lines Mono Mac 6 and U-937. RESULTS: 1) Incubation of transfected cells with fluorescently labeled CRP showed no binding to Fc-gamma RIII. 2) Alternating inhibition of FcR by IgG and specific antibodies turned out Fc-gamma RI to be the most important receptor for CRP binding on macrophage-like cells. 3) By fluorescence correlation spectroscopy, a moderate binding of native LDL to CRP could be observed in solution. This complex seems to enhance CRP binding to cells; yet, the nature of this interaction has to be further elucidated. CONCLUSION: These results show a growing evidence for an active involvement of CRP in cardiovascular disease. Further studies should be undertaken with primary cells and proper animal models in order to confirm these findings.