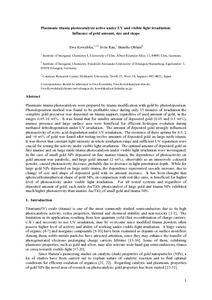 Plasmonic titania photocatalysts were prepared by titania modification with gold by photodeposition. Photodeposition method was found to be profitable since during only 15 minutes of irradiation the complete gold precursor was deposited on titania support, regardless of used amount of gold, in the ranges 0.05-10 wt%. It was found that for smaller amount of deposited gold (0.05 and 0.1 wt%), anatase presence and large surface area were beneficial for efficient hydrogen evolution during methanol dehydrogenation under UV irradiation. The amount of deposited gold strongly influenced photoactivity of acetic acid degradation under UV irradiation. The existence of three optima for 0.5, 2 and > 6 wt% of gold was found after testing twelve amounts of deposited gold on large rutile titania. It was shown that constant light intensity at whole irradiation range and sufficient UV separation were crucial for testing the activity under visible light irradiation. The optimal amount of deposited gold on fine anatase and on large rutile titania photocatalysts under visible light irradiation were investigated. In the case of small gold NPs deposited on fine anatase titania, the dependence of photoactivity on gold amount was parabolic, and large gold amount (2 wt%), observable as an intensively coloured powder, caused photoactivity decrease, probably due to decrease in light penetration depth. While for large gold NPs deposited on large rutile titania, the dependence represented cascade increase, due to change of size and shape of deposited gold with its amount increase. It has been thought that spherical/hemispherical shape of gold NPs, in comparison with rod-like ones, is beneficial for higher level of photoactivity under visible light irradiation. For all tested systems and regardless of deposited amount of gold, each rutile Au/TiO2 photocatalyst of large gold and titania NPs exhibited much higher photoactivity than anatase Au/TiO2 of small gold and titania NPs. (Der Aufsatz wird auch veröffentlicht im Journal of nanotechnology: http://www.hindawi.com/journals/jnt/.)