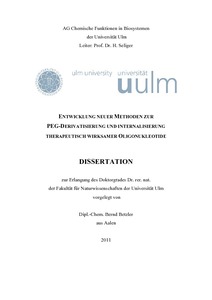 The first aim of this project was to develop a universal method for the double sided asymmetrical PEGylation of therapeutic oligonucleotides. Therefore an immobilising strategy was developed with the oligonucleotide initially attached to an amino functionalised support. The PEGylation of the free 5´-end was carried out while the 3´-end was still anchored to the solid phase. Using a long chain, polydisperse PEG, and a short chain, monodisperse PEG, the separation from unreacted by-products is impossible because of the overlapping molecular masses. The thus strictly given pattern of modification with the monodisperse PEG at the 5´-end could be circumvented by using 5´-phosphoramidites. For monitoring the nucleolytic degradation a coupling of RP-HPLC and MALDI-TOF MS, as well as the application of a polyacryamide gel, turned out to be good methods. The mere examination by RP-HPLC is not sufficient, because truncated sequences without PEG modification cannot be detected. All these tests proved that every PEGylation pattern leads to a strongly improved stability against 5´- and 3´-exonucleases. In the second part, a recombinant fusion protein of dimeric streptavidin and cell internalising penetratin was produced by expression in E. coli. This construct could provide an opportunity to introduce biotinylated oligonucleotides into cells by the internalising effect of the penetratin part. For that purpose an expression vector containing the penetratin encoding base sequence in combination with a dimeric streptavidin gene was constructed. The encoding sequence for the dimeric streptavidin was PCR amplified using the plasmid pTSA43 as template. The 48 nucleotides penetratin encoding sequence was inserted by synthesis into one of the PCR primers. By use of the E. coli strain JM109 with lacIq mutation for cloning, it was possible to obtain an error free expression vector coding for a fusion protein that showed biotin binding properties.