Nanowires and surface tuning: electrocatalysis at the nanoscale 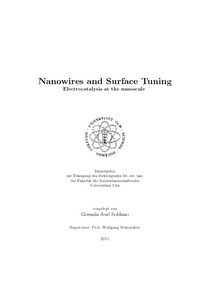 One of the biggest challenges of this century is to produce sustainable and environmental friendly devices that can cope with the constantly increasing energy demand. Hydrogen-oxygen fuel cells are among the most promising solutions for this issue. The common aim along this thesis is to investigate nanostructures as promising catalysts for the hydrogen evolution reaction. We started by addressing an ultimate case of the nanoscale: free-standing monoatomic nanowires. We found that on Cu and Au wires, hydrogen atoms are much more strongly adsorbed than on planar surfaces. Indeed, the adsorption of hydrogen on Cu and Au becomes exergonic on the wire. Using the Schmickler-Santos theory for the proton adsorption in water, we predict that the process is much faster on Cu and Au wires than on the corresponding planar surfaces. Therefore, Au and Cu wires promise to be good catalysts for hydrogen evolution. In the second part of my thesis we studied more stable systems: graphite-supported wires. These wires are attached to the step of graphite layers. Unfortunately, Au and Cu graphite-supported wires are not as reactive towards hydrogen as they are in the free standing form. However, Ni, Pd, and Pt supported wires seem to be as good catalysts as their planar surfaces (with the advantage that much less metal is required for catalysis.) Finally, the enhancement of the catalytic properties of Rh by its deposition on Au and Pd surfaces is studied.