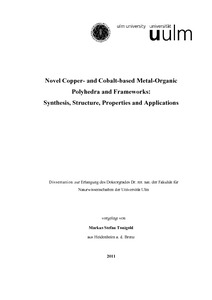 Two main topics in the field of porous coordination polymers were the subject of this thesis. The first part is dedicated to the synthesis, structure and structural integrity of defined supramolecular Nanoballs and their integration into polyurethanes (chapters 2 - 4). The second part addresses the structures of two novel metal-organic frameworks based on redox-active cobalt(II) ions, and their use in the heterogeneous catalysis of oxidation reactions (chapters 5 - 6). In the first part of this thesis, the synthesis of new, highly soluble hydroxy-functionalised Nanoballs is presented. The selfassembly of copper(II) ions and derivates of benzene-1,3-dicarboxylate leads to these Nanoballs in which twelve dinuclear copper(II) paddle-wheel units are interconnected via 24 ligands. Compared to kinetically labile dinuclear copper(II) paddle-wheel complexes such as copper acetate or benzoate, Nanoballs are kinetically more stable which is presumably due to their more rigid structure (chapter 3). In addition to their increased kinetic stability, Nanoballs are also thermodynamically more stable than simple dinuclear copper(II) paddle wheel complexes such as copper acetate or benzoate due to the chelate effect (or, in other words, positive chelate cooperativity). In the second part of this thesis, detailed structure analyses are presented and catalytic activities are discussed for two novel metal-organic frameworks (MOFs). Reacting the heterocyclic ligand 1,4-bis[(3,5-dimethyl)-pyrazol-4-yl]benzene (H2-bdpb) with a suitable Co(II) salt leads to formation of two compounds [Co4O(bdpb)3] (named "MFU-1") and [Co(bdpb)] (named "MFU-2"). Comparative test reactions show that both compounds are catalytically active, demonstrated by the allylic oxidation of cyclohexene with tert-butyl. Both MOFs show different structural stabilities and leaching properties throughout the course of catalytic turnover (chapter 5).