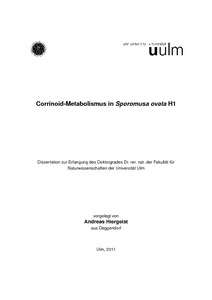 Sporomusa ovata H1 produces acetic acid from methanol plus CO2. Two vitamin B12 derivates are involved in this pathway: p-cresolylcobamide and phenolylcobamide. The biosynthesis of these corrinoids involves two unusual reactions: cleavage of tyrosine into phenol and p-cresol and O-glycosidic ligation of these aromatics to ribose. In addition, vitamin B12 is synthesized from the precursor 5,6-dimethylbenzimidazole. Surprisingly, increasing B12 concentrations within the cells caused a strong growth inhibition. This is the first report, that vitamin B12 as a cofactor inhibits corrinoid-dependent reactions. Riboswitches are metabolite-sensing RNA structures, which are involved in the regulation of numerous fundamental metabolic pathways in bacteria. The genome of Sporomusa ovata H1 was analyzed for B12 riboswitches. Twelve of these regulatory elements were detected. Genes of corrin ring biosynthesis, the biosynthesis of the lower cobalt ligand (cobT) and corrinoid transport are regulated by B12 riboswitches. Furthermore, B12 riboswitches were detected upstream of genes coding for a predicted nitrogenase, a LuxR-family transcriptional regulator and unknown gene products. A binding site for the transcriptional regulator LuxR was identified and confirmed upstream of a cobalt chelatase gene. A B12 riboswitch-regulated cobT gene was identified and its gene product was biochemically characterized. CobT of Sporomusa ovata H1 was able to catalyze the O-glycosidic bond of p-cresolylcobamide and the N-glycosidic bond of vitamin B12 precursors. Growth inhibition was observed with benzimidazole and 5,6-dimethylbenzimidazole, but not with imidazole, suggesting a steric effect either on a protein attachment. The Acetyl-CoA synthase operon of Sporomusa was investigated. It encodes a corrinoid-dependent subunit. Thus, this enzyme was also inhibited by vitamin B12 formation because this inhibition was reverted by the growth substrate pyruvate as the precursor of acetyl-CoA.