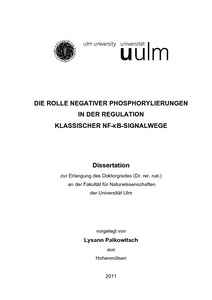 The classical NF-kappaB-signaling is not only one uniform pathway but consists of several distinct signaling pathways which differ regarding their inducing agents, the intracellular proteins involved in signal transmission, the kind of activated NF-kappaB dimers and the set of induced target genes. However, the precise molecular mechanisms by which these differential NF-kappaB activation patterns are determined still remain largely unknown. The key regulator within the classical NF-kappaB-signaling cascades is the IKK-complex. Since structural alterations in the IKK-complex are thought to participate in the regulation of its kinase activity, protein-protein-interactions within the IKK-complex were characterized. The IBD in NEMO has been shown to mediate the interaction with the IKKs. However, our studies reveal that the IBD additionally constitutes an independent oligomerization interface. Interestingly, the IBD possesses several phosphorylation sites. Yet, the physiological functions are still largely unknown. IKKß-mediated phosphorylation of Ser68 in the IBD caused a reduced NEMO-IKKß interaction and NEMO oligomerization. The negative effect of the Ser68-phosphorylation on the classical NF-kappaB-signaling pathways underline the importance of phosphatases and specific dephosphorylation events for the classical NF-kappaB activation. Therefore the yet poorly defined role of the protein phosphatase calcineurin in the TCR-induced NF-kappaB activation was analyzed. Our results point out that calcineurin acts as a BCL10 phosphatase that removes inhibitory phosphate groups from BCL10 in the early activation state. Therefore a molecular basis of how calcium influences the TCR-induced NF-kiappaB-signaling pathway is the calcineurin-mediated regulation of the CBM-complex. In summary these data underscore the importance of negatively regulating phosphorylations, which are necessary to avoid an unwanted chronic NF-kappaB activation and highlight the relevance of phosphatases in the process of IKK activation.