Analysis of the biotechnological production of 2-ketomethylvalerate with Corynebacterium glutamicum 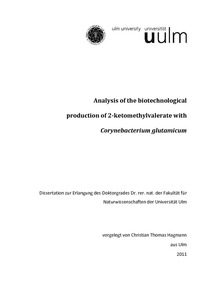 The current work deals with the biotechnological synthesis of alpha-ketomethylvalerate (KMV) with Corynebacterium glutamicum. KMV together with the two other branched-chain alpha-keto acids alpha-ketoisovalerate (KIV) and alpha-ketoisocaproate (KIC) is used as a pharmaceutical agent and also as ingredient of functional food. So far KMV has only been produced by chemical synthesis and the aim of this work was to initiate the development of a fermentative KMV production. When C. glutamicum was cultured in the presence of KMV the growth rate and the final cell density were significantly reduced. The experiments also revealed that the branched-chain alpha-keto acids are degraded by C. glutamicum during growth. Specific branched-chain alpha-keto acid converting enzymes could not be identified in C. glutamicum. Analysis of key enzymes of the KMV biosynthesis revealed that the pyruvate condensing reaction of the acetohydroxy acid synthase (AHAS) is competitively inhibited by 100 mM KMV, whereas the condensation reaction of 2-oxobutyrate plus pyruvate of the enzyme proved to be resistant. The condensation reaction of 2-oxobutyrate plus pyruvate of the AHAS was inhibited by branched-chain amino acids in the same way as the pyruvate condensing reaction. Remarkable was the decrease of the K m-value for 2-oxobutyrate from about 6 mM to less than 2.5 mM in the presence of L-valine. Such a regulatory effect may secure the supply with L-isoleucine in the presence of high concentrations of L-valine. As a basis for the construction of a KMV production strain the L-lysine producer C. glutamicum DM1729 was employed. In this strain the ilvE-gene, encoding the transaminase B, was deleted, which lead to an about 65 % increased excretion of L-lysine. To redirect the carbon flow towards KMV synthesis the genes hom FBR, thrB, thrC and ilvA, encoding a feedback-resistant version of the homoserine dehydrogenase, the homoserine kinase, the threonine synthase and the threonine dehydratase, were overexpressed on plasmids. The resulting strain C. glutamicum DM1729 Delta-ilvE (pEK hom FBR thrB thrC) (pMM36ptac ilvA) is the first described strain for the intentional production of KMV from glucose. After optimization of medium composition and growth conditions a maximal concentration of 35 mM KMV was produced from 4 % glucose as only carbon source.