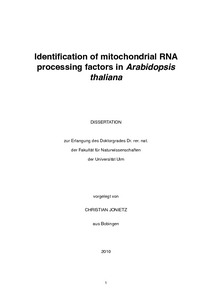 Mitochondrial gene expression of higher plants is a very complex process where precursor RNAs undergo numerous modifications until mature mRNAs are formed. One of the least understood maturation steps is the posttranscriptional generation of 5‘ ends. In this process the 5‘ regions of the large precursor transcripts, which can be up to several kBs long get shortened down to a maximum of a few hundred nucleotides. Among the different accessions of Arabidopsis thaliana variations in the lengths of the 5‘ untranslated regions exist for some of the genes. These are linked to natural genetic variations within either the mitochondrial or the nuclear genomes of those ecotypes. Up to now, very few proteins taking part in 5‘ RNA processing have been characterized. This work describes the identification of two nuclear encoded factors needed for the generation of mature mitochondrial mRNAs. Based on natural genetic variation a forward genetic approach was used to identify the nuclear-encoded RNA Processing Factor 2 (RPF2), which is required for the generation of nad9 mRNAs with 5‘ ends around -202 in respect to the translation start codon as well as the generation of a cox3 mRNA with a 5‘ end around -380 in the accessions Columbia and C24. Another factor which was found through a reverse genetic approach by screening the mitochondrial mRNA end phenotypes in different T-DNA insertion lines and was named RNA Processing Factor 3 (RPF3). This protein plays an important role in the formation of mature ccmC transcripts with 5‘ ends around -484/-482 in the ecotype Columbia and affects the steady state level of ccmC mRNAs with a 5‘ end around -391 in the accession C24. In both cases accessions specific cis elements seem to have an influence on the 5‘ processing events. Both proteins belong to a subfamily of the P class of pentatricopeptide repeat proteins with high similarity to RESTORER OF FERTILITY genes from different plant species. They are imported into mitochondria where they presumably bind the respective target RNAs which ultimately leads to endonucleolytic cleavage and the formation of mature, translatable mRNAs.