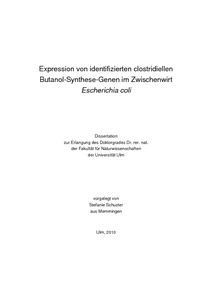 Escherichia coli was metabolically engineered for the production of next generation biofuel 1-butanol. Therefore electrotransformation was performed with artificial plasmids harbouring the butanol-synthesis genes from Clostridium acetobutylicum and Clostridium beijerinckii. So far, the functional expression of the genes was proven by demonstrating the synthesis of 1-butanol from glucose in different E. coli strains. To investigate the butanol production in acetogenic bacteria such as Clostridium ljungdahlii, the butanol-synthesis genes were cloned into the shuttle vector pIMP1. C. ljungdahlii is able to grow on synthesis gas, a mixture of CO, CO2 and H2. Synthesis gas can be easily produced and does not compete with the food industry such as conventional butanol fermentation which uses corn or sugar as substrate. Furthermore, genome sequence analysis of C. acetobutylicum revealed a gene (CAC3330) encoding a cytochrome P450 monooxygenase (CYP152A2). The gene coding for CYP152A2 was amplified and expressed in E. coli. After overexpression and purification of P450 monooxygenase, it was demonstrated that this enzyme is able to catalyze the hydroxylation of fatty acids in the presence of hydrogen peroxide. The "ClosTron® Gene Knockout System" was used for the specific disruption of CAC3330, and in growth experiments, the consequences of the gene inactivation were determined.