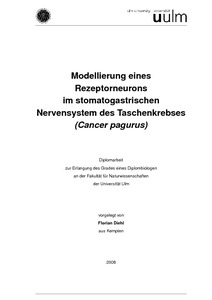 Animal behavior, and movement in general, is generated by a network of autonomous muscles. The question of how it achieves the task of computing current as well as desired states of contraction and sending this information back to the muscles within a split-second, has not been fully answered so far. The stomatogastric nervous system (STNS) of the crab (Cancer pagurus) is a well understood system on which to address this question. A real-time simulation of a neuromuscular system in the stomatogastric ganglion (STG) has been constructed, simulating the muscle’s as well as the proprioceptor’s activities. The neuromuscular compartment chosen for simulation consists of the anterior gastric receptor (AGR) and the protractor muscle of the medial tooth in the gastric mill (gm1). On muscle contraction AGR’s activity affects projection neurons in the commissural ganglia which themselves modulate activity of neurons in the STG, thus creating an "open-loop" reflex pathway. The computer-model simulates AGR’s complex activity patterns as well as the gm1 muscle. To simulate the AGR activation via the muscle I used a transfer function developed by C. Geier (Ohio University, USA) which computes a tension curve from motoneuron activity. Both models were hand-tuned to fit measured activity patterns of AGR and the motoneuron. The real-time simulation, consisting of the muscle- and the receptor-model, was then connected to the living nervous system. Motoneuronal activity from intracellular recordings was computed into a tension curve by the transfer function wich activated the AGR model. The simulated activity was sent into the biological AGR via an intracellular electrode. This real-time simulation technique allows to gather further insights on the impact of feedback from a muscle activity sensor on higher neuronal centers.