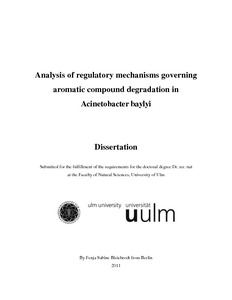 The ability to adapt gene expression is a powerful tool of an organism exposed to a continuously changing environment. For example, the mechanisms responsible for the adaptation of bacteria to the continuously changing presence of available carbon sources must be fast and unfailing. Only the best adapted organisms will have an advantage, regarding survival and reproduction. This advantage is dependent on energy conservation, since the carbon source which is easiest to degrade and which leads to maximal energy conservation has to be preferred over others. The mechanism leading to preferred carbon source degradation is commonly described as carbon catabolite repression (CCR). With respect to aromatic compound degradation through the beta-ketoadipate pathway in Acinetobacter baylyi, CCR acts on different levels. These mechanisms are known as (i) CCR by succinate and acetate, (ii) cross-regulation by benzoate, and (iii) vertical regulation by protocatechuate (PCA). All three mechanisms share the ability to override the specific gene regulation, and are thus of elevated nature. The analysis of these mechanisms is the central part of the current thesis, and mainly based on luciferase reporter gene strains, containing the luc gene (Photinus pyralis) as a transcriptional fusion in genes encoding enzymes involved in aromatic compound degradation. As described in the following chapters, regulatory proteins involved in CCR, cross-regulation and vertical regulation were identified in vivo. In addition, the compounds inducing the regulations were identified and hints about how the mechanisms could work were derived from in in vivo, in vitro, and in silico approaches.