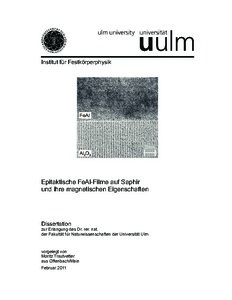 In the presented thesis epitaxial FeAl thin films on sapphire have been prepared by pulse laser deposition (PLD). The thin films deposited at room temperature exhibits ferromagnetism and subsequent annealing is necessary to transform the thin films to paramagnetic B2-phase, where the transition temperature depends on the crystalline orientation of the sapphire substrate. Alternatively, by deposition at higher substrate temperature the B2-phase is obtained directly. However, morphology of the FeAl film is influenced by different growth modes resulting from different substrate temperatures. The paramagnetic FeAl films can then be transformed to ferromagnetic phase by successive ion irradiation. Independent of the ion species used for irradiation, the same universal relation between thin films´ coercive fields and irradiation damage is identified. The ion irradiation ferromagnetism can be transformed back to paramagnetism by subsequent annealing. The mutual transition between ferromagnetic and paramagnetic phases has been performed several times and shows full reversibility. The ferromagnetic phase induced by Kr ion irradiation exhibits structural relaxation, where the saturate magnetization of FeAl thin film gradually decreases in several days. Later, ion irradiation has been performed selectively on defined areas of the thin film with the help of an unconventional lithography technique. The subsequent thin film is composed of ordered hexagonal array of ferromagnetic nano-cylinders separated by a paramagnetic matrix, suggesting a promising system for magnetic data storage.