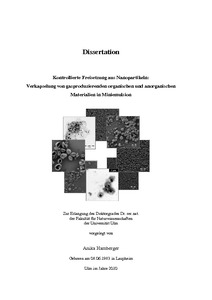 By the Miniemulsion approach gas producing agents like organic azo compounds and azides were encapsulated into polymeric nanoparticles. Different approaches like radical and anionic polymerization of monomers and the solvent evaporation method were used for the encapsulation process. The gas development of these encapsulated components should be used to create pressure inside the polymeric particles or capsules. This overpressure should lead to the rupture of the surrounding shell, whereby different compounds could be released from the capsule’s or particle’s inner sphere. After thermal degradation of the gas producing agents a change in the particle morphology could be observed by electron microscopy. Using the inverse miniemulsion process, a novel synthesis principle for the preparation and encapsulation of hardly soluble inorganic nanomaterials was studied. As a model system, the precipitation and encapsulation of barium sulfate by co-sonification in an inverse miniemulsion was analyzed. The hardly soluble salt was prepared from two water soluble salts by mixing them to the excess of the product of solubility. In a second step, the inorganic material could be encapsulated into a polymer shell by interfacial polyaddition. By this approach the encapsulation of hardly soluble silver oxalate and azide is also possible. The silver salts could be degraded at increased temperatures to form gaseous products and metallic silver, which could be analyzed by electron microscopy, thermal analysis and XRD experiments.