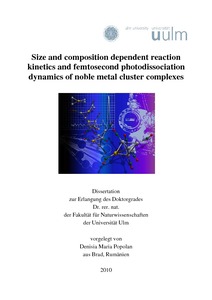 The aim of the present work was the investigation of the size and composition dependent chemistry of free, mass-selected gold, silver, and binary silver-gold clusters. Temperature dependent reactivity measurements were performed to determine the binding energies of CO to the binary silver-gold trimer and pentamer clusters. The CO binding energies to AgnAum+ (n + m = 3, 5) clusters were found to decrease with increasing number of silver atoms. More strikingly, after the adsorption of the fourth CO to Au5+ and third CO to Ag5+, respectively, a pronounced decrease in the binding energies of further CO molecules was observed. In conjunction with theoretical simulations performed by Vlasta Bonacic-Koutecký, it could be demonstrated that this observation can be explained by a CO-induced structural transformation yielding more compact metal clusters geometries. While gold and silver cluster cations were found to be completely inert towards molecular oxygen under our experimental conditions, it was possible to produce metal-oxide clusters through the reaction with nitrous oxide. Experimental evidence was obtained for the occurrence of a complete catalytic CO oxidation cycle promoted by silver and gold oxide, which was generated by reaction with N2O. Furthermore, the reactions of size-selected gold and silver clusters cations Agn+ and Aun+ (n = 3, 5) with C6H6 and with a mixture of C6H6 and CO were investigated. In the case of silver clusters photodissociation experiments at 353 and 393 nm, respectively, provided indications for a charge transfer induced fragmentation. In particular, for Ag5(C6H6)+ the femtosecond time resolved fragmentation dynamics could be measured. In a final series of experiments the gas phase reactions of gold cluster cations, in this case with CH3Br, could be directly compared to similar experiments with metal oxide supported gold clusters that were obtained in the same apparatus.