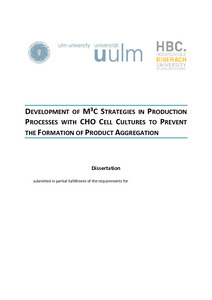 Product aggregation can occur in different stages of a biopharmaceutical production process and represent a risk for the patient since aggregates can reduce the safety and efficacy of biopharmaceuticals. Hence, aggregates have to be detected, quantified and cost intensively removed during downstream processing (DSP). However, it is described in literature that product aggregation can already occur during the upstream process (USP) caused by various process operations. Addressing this issue upstream in process development e.g. by the addition of osmotically active supplements to the cell culture might reduce product aggregation and subsequently improve process yields and reduce the burden on DSP. To this end, real-time bioprocess monitoring of product and aggregate formation as well as further critical process parameters such as cell or glucose concentration during USP is desirable. The aim is the establishment of a process control tool which enables real-time monitoring and the fully automated reduction of product aggregation during the upstream process. One possibility for bioprocess monitoring is 2D fluorescence spectroscopy based on fluorescence signals derived from cells and medium components. To this end, the altering intrinsic fluorescence of three different CHO DG44 production cell lines producing different monoclonal antibodies (mAb) was recorded. The spectra can be used for chemometric modelling for the establishment of so called soft sensors, whereby product aggregation and other offline measured parameters are used for model calibration and subsequently for instance product quality prediction. The here established multivariate partial least squares (PLS) regression models for glucose and viable cell concentration were used for the implementation of an automated feeding control system. In parallel, small soluble and larger insoluble mAb aggregates were determined in the cell culture supernatant with SE-HPLC and fluorescence microscope imaging, respectively. For reduction of aggregate formation during cell culture, various osmotically active salts, buffers, amino acids as well as sugars and polyols were screened for their impact on cell growth, mAb productivity and aggregate reduction. Sodium chloride, sodium sulfate, lithium chloride, L-valine, L-lysine, and D-mannose were further investigated in a design of experiment approach, to evaluate their interrelation and applicable concentrations for aggregate reduction in cell culture. The established mixture of these supplements was applied to the three different mAb producing cell lines and one non producing CHO cell line as control in several batch and fed-batch approaches and confirmed its aggregate reducing potency. Subsequently, the aggregate reducing osmotically active supplements were implemented in the glucose feed and added via the established feeding control system during the bioprocess depending on cell growth and glucose consumption rate. The soluble aggregate formation was reduced in bioreactor by full automated glucose feed addition.