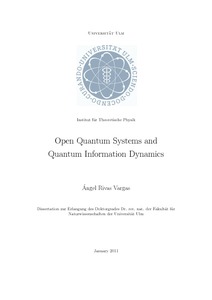 In the first part of this thesis we extensively review the general theory of open quantum systems. We introduce new approaches to describe, in a hopefully more transparent way, some aspects which are usually misleading in a broad range of the literature. In addition, we revise new concepts and methods developed in recent years that complement the general theory mainly developed in the 1970s. In the second part, we focus our attention on the so-called Markovian processes which have been described in the previous part. We study the validity of typical equations used in simple systems such as harmonic oscillators, and propose and check different strategies to describe Markovian dynamics in more complicated interacting systems. Finally we propose a counter-intuitive situation where some level of noise can be actually useful for information tasks. In the third and last part, we approach the problem of the non-Markovian description of open quantum systems. To quantify how non-Markovian an open quantum system is we introduce a computable measure and apply it to some relevant situations. We also propose a way of probing the complexity of an environment by visualizing properties of a pair of qubits embedded in it. In addition, we develop a technique based on orthogonal polynomial theory to transform a wide range of environments into simple chains of particles which can be efficiently simulated with numerical techniques.