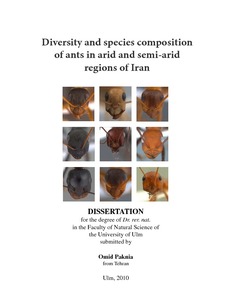 The general objective of this dissertation was to broaden the understanding of the impact of environmental and spatial factors on diversity and assemblage organization of ants in arid and semi-arid regions in Iran. My thesis included four stages: The first step included faunistical and taxonomical studies on the poorly known ant fauna of Iran. In the second step, I described and analyzed the diversity pattern of ants along a latitudinal gradient and in two main biomes of Iranian arid regions: steppe and desert. In the third step, ant diversity and composition was analyzed by a hierarchical partitioning approach, from a conservational perspective. In the fourth step, I analyzed the impact of environmental and spatial factors on ant species richness and species composition across the latitudinal gradient and in the Central Persian desert ecoregion. My results revealed that alpha species richness increased along the gradient, but beta diversity did not follow any specific trend. Multiscale analysis of the data showed a constant increase in species richness and diversity of ants across fine-to-broad scales. The steppe biome had higher numbers of species than the desert biome, but only at the highest scale. The two biomes represented two distinctive ant species compositions. Further analyses of hierarchical partitioning showed that the WWF’s ecoregions correctly represent the biogeographic components of ants in Iran and are appropriate scale for conserving of ant diversity. In one case, the boundaries of these four compositions, however, showed a deviation from the depicted boundaries by the WWF’s map, suggesting that the ecoregional boundaries should be considered as a subject for further tests of their robustness. Contemporary climate factors such as rainfall and temperature range and productivity have large influence on ant diversity and assemblage organizations.