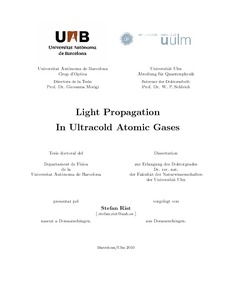 In the present thesis we study several schemes where the detection of the emitted light from an atomic ensemble gives information about the state of the atoms. In chapter 1 we review the basic theory for the light matter interaction in second quantized form. In chapter 2 we show how conservative potentials for the atoms, such as dispersive optical lattices, can be realized experimentally due to the dispersive interaction with a far detuned laser We then review some basic properties of the physics of a particle in a periodic potential. We show that the ground state and the lowest lying excitations of a Bose-Einstein condensate in a dispersive optical lattice can be described by the Bose-Hubbard Hamiltonian. In chapter 3 we study the photonic bandstructure of a chain of fixed pointlike atoms in a biperiodic configuration. We calculate the photonic spectra and the probe transmission if the atoms are in free space and inside a standing wave optical resonator. In chapter 4 we consider light scattering from ultracold atoms in an optical lattice where we calculate the photonic scattering cross section as a function of energy and direction of emission along the Mott-insulator-superfluid phase transition. We take into account the finite tunneling rate for the atoms, when evaluating the scattering cross section of the photons and the effect of photon recoil onto the atoms. In chapter 5 we consider a gas of ultracold atoms trapped at two spatially separated regions in space. Using a two Raman lasers to couple atoms out of the systems we show that it is possible to measure the mean value of the atomic field operator of the two systems by measuring the scattered light intensity of one of the Raman lasers. We show how this setup might be used to measure the temperature of a Bose-Einstein condensate and to monitor the superfluid to Mott-insulator phase transition for a gas of ultracold atoms in an optical lattice.