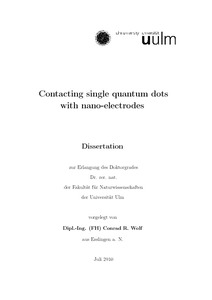 In this thesis semiconductor quantum dots were contacted with nano-electrodes to yield single-electron devices. Silicon quantum dots were prepared from a SOI substrate by means of a self-assembled colloidal etch mask and reactive ion etching. Furthermore, CdSe/ZnS core/shell quantum dots were employed and deposited onto the electrodes with special linker molecules. To contact the quantum dots electrode pairs with a separation of only a few nanometers were necessary. All methods for electrode fabrication were based on electron beam lithography yielding separations down to 10 nm. Electrode pairs with even smaller distance were fabricated with a controlled electromigration process. Besides, electrochemical deposition was employed as further method to realize electrode separations of only a few nanometers. By combining these methods single-electron devices with a quantum dot attached to two electrodes via tunneling barriers were fabricated. Transport measurements on single-electron transistors based on silicon quantum dots showed Coulomb blockade and Coulomb staircase characteristics. By applying a gate voltage, the single-electron transistors could be switched from a non-conducting to a conducting state. In the measurements on the significantly smaller CdSe/ZnS quantum dots also a step-like increase was observed in the current. This time the steps were not equidistant and their positions could be correlated with the energy spectrum of the quantum dot"s electron states. For both cases model calculations based on the orthodox theory were performed. The behavior of the silicon quantum dot devices was well described by the simple model. In case of the CdSe/ZnS based devices first the energy spectrum of the quantum dot was calculated from its geometry. The spectrum was included into the model calculation and then also a very good agreement with the measurement was achieved.