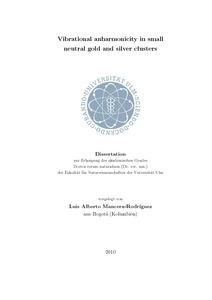 This thesis presents a systematic study of anharmonicity in small neutral gold and silver clusters applying the vibrational self-consistent field method (VSCF). This application relies on a plane-wave representation of the electronic wave function in the frame of density functional theory (DFT). The minimum energy structures of the clusters are investigated using the PBE functional with ultrasoft Vanderbilt pseudo potential basis sets. This choice is based on a meticulous comparison to other DFT approaches, to other electronic structure methods, and to experimental values. To study vibrational anharmonicity the potential energy surface (PES) is explored using the chosen plane-wave DFT approach and a hierarchical many-body expansion of the potential, limited to the second order. This implies that deviation from the harmonic behavior is achieved by including single-mode and mode-mode contributions to the potential. A correction in order to compensate the lack of explicit correlation between modes is included using a configuration interaction approach (VSCF/VCI). An efficient reduction of the number of couplings between vibrational modes (fast-VSCF/VCI) is used to speed up calculations. Fast-VSCF/VCI relies on PES pre-scanning using the Voter-Chen version of the embedded atom model. In order to assess the quality of various typical potentials, an alternative methodology is proposed, based on local comparison of PES around a minimum energy structure. The effect of noble gas embedding on gold and silver clusters is systematically studied, resorting to the electronic localization function (ELF) and Fukui reactivity indices. Characteristics of the noble gas atom binding to the clusters are explained in terms of the electrostatic potential and frontier orbitals.