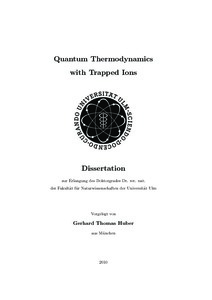 This thesis deals with a field of research, which is fairly new ground in experimental physics: the thermodynamics of small systems in the quantum regime. In small systems, which means systems with only few degrees of freedom, phenomena arise, that are unknown or even explicitly forbidden within the thermodynamics of macroscopic systems. Among these phenomena are non-equilibrium effects like the statistical fluctuation of otherwise well-defined system properties and violations of the second law. The importance of such phenomena can be seen from biological systems exploiting exactly these effects in order to perform vital work within the human organism, just to give one example. Additionally, quantum effects arise, when the systems are sufficiently isolated. These quantum features crucially alter the system"s properties and introduce a further statistical element into their dynamics. While first experiments could be performed on this field in the classical regime, one is still lacking the decisive step with a physical system, which allows for a full quantum mechanical investigation. This work first discusses general requirements put on a physical system in order to realize such experiments. The challenges in the quantum regime are distinctly higher than in the classical case, as decoherence and dissipation can render the observation of quantum effects impossible. Then we will demonstrate, that we can fulfill all requirements with a specific system, namely single cold ions confined in a Paul trap. All points will be discussed in detail and verified experimentally. In doing so, first applications arise unveiling close connections to other disciplines like quantum information theory. We will see, that the proposed system is in deed predestined for the investigation of non-equilibrium thermodynamic processes. Distinct questions raised by current research will be shown to become experimentally accessible for the first time by applying the developed techniques.