Design, synthesis, and characterization of coordination compounds and coordination polymers based on 1,2,3-triazolate ligands 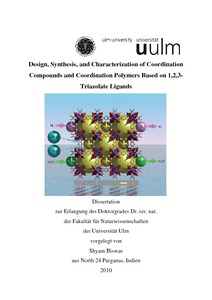 The importance of benzotriazole and its derivatives as important precursors for the synthesis of polynuclear compounds and polymers is described. The compounds [MZn4Cl4(Me2bta)6] has been prepared by vapor diffusion and direct addition of lutidine route. The nonanuclear compounds have been synthesized by using an excess of ligand or vapor diffusion of lutidine method. The pentanuclear compounds have nonplanar K3,3 graph. Single crystal data show the presence of HS metal ions. TG analyses reveal high thermal stability. TOF-MS analyses and UV-Vis spectroscopy confirm their structural integrity in solution. The high thermal and solvolytic stability with the availability of redox-active metal ions and coordinatively unsaturated Zn sites would enable them to perform redox and Lewis-acid catalysis. Magnetochemical analysis show net antiferromagnetic coupling in the nonanuclear Co compound, whereas both ferro- and antiferromagnetic coupling is observed in the nonanuclear Ni compound. Mössbauer spectroscopic investigations on [Fe3Zn6Cl6(OMe2bta)12] reveal a HS --> LS transition for only the central Fe(II) ion upon cooling. Electrochemical investigations on this compound show a reversible oxidation of the FeII ions. X-ray diffraction studies and UV-Vis analyses indicate the presence of both HS and LS FeII ions. Two coordination polymers [Zn5Cl4(BBTA)3] * 3DMF (MFU-4) and [ZnCl(BBTA)0.5(DMA)] have been synthesized by the solvothermal route. The particular choice of solvent during MOF synthesis has been demonstrated. Both polymers show strong luminescence emission properties. A rapid microwave synthetic route has been developed for MFU-4. It possesses a slightly higher thermal stability. Heterometallic MFU-4 type frameworks can be used in redox catalysis. The tetrahedral Zn centers in MFU-4 may be used in Lewis-acid catalysis. It exhibits a selective adsorption for H2 vs. N2.