Readout of a superconducting qubit: a problem of a quantum escape processes for driven systems 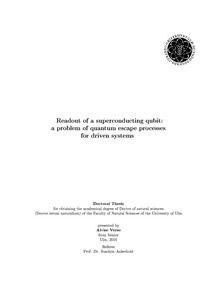 Motivated by recent experimental progress to readout quantum bits implemented in superconducting circuits via the phenomenon of dynamical bifurcation, transitions between steady orbits in a driven anharmonic oscillator, the Duffing oscillator, are analyzed. In the regime of weak dissipation a consistent diffusion equation in the semiclassical limit is derived to capture the intimate relation between finite tunneling and reflection and bath induced quantum fluctuations. From the corresponding steady-state distribution an analytical expression for the switching probability is obtained. It is shown that a reduction of the transition rate due to finite reflection at the phase-space barrier is overcompensated by an increase due to environmental quantum fluctuations that are specific for diffusion processes over dynamical barriers. The scaling behavior of the rate is discussed and it is revealed that close to the bifurcation threshold the escape dynamics enters an overdamped domain such that the quantum-mechanical energy scale associated with friction even exceeds the thermal energy scale.