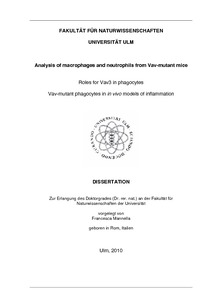 The Vav family are proteins that contain domains important for binding to other proteins and an enzymatic domain that activates RhoGTPases. There are 3 Vav family members, Vav1, Vav2 and Vav3. Vav1 and Vav2 are important regulators of lymphocyte development and function. We hypothesized that Vav family members were also essential for macrophages and neutrophils functions. Our initial studies were on Vav1 and Vav2 KO mice but were expanded to Vav3 KO mice when these became available. Analysis of Vav1 and Vav2 mutant phagocytes revealed that major phagocyte functions such as phagocytosis, TNFalpha-production, migration, and actin polymerization were not affected by the loss of both Vav1 and Vav2. However, expression of Vav3 was particularly high in phagocytes and when Vav3 KO phagocytes were tested for the same functions, it became clear that Vav3 is a critical regulator of myeloid cell functions. In order to test the requirement for Vav3 in the immune system, we used two in vivo models that depend on macrophages and neutrophils, among other cell types: thioglycolate (TG)-induced peritonitis and wound healing. TG-induced peritonitis in Vav3-/- mice showed a distinct defect in macrophage recruitment to the peritoneum, demonstrating a role for Vav3 in macrophage functions in vivo. With our investigations into wound healing in Vav3-/- KO mice and Vav1-/-Vav3-/- double knockout mice, a specific role for Vav3 in macrophages was identified. Wounds heal slower in Vav3-/- mice than in wildtype mice. Furthermore, our investigations revealed that Vav3 is required for signaling downstream of Beta2-integrin receptors in macrophage adhesion and phagocytosis of apoptotic neutrophils. Without this critical step, macrophages are not stimulated to produce ROS and active TGF-Beta;1, required for activating myoblasts in wound closure. Therefore, Vav3 is a critical regulator of macrophages and of neutrophils in signaling leading to actin-dependent cytoskeleton functions.