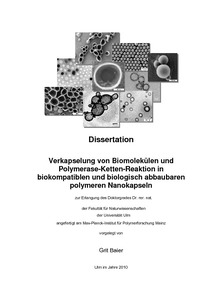 Different biomolecules such as potato starch, HES 130, HES 200, mannitol, hyaluronic acid or n-butylcyanoacrylate were used for the synthesis of polymeric nanocapsules sized between 200 and 500 nm using the inverse miniemulsion process. These capsules were used for the encapsulation of fluorescent dyes, dsDNA or doxorubicin. Following the synthesis the capsules were successfully transferred to an aqueous medium for the purpose of better biocompatibility. It could also be shown, using fluorescence spectroscopy, that nanocapsules can serve as nanoreactors by encapsulating dsDNA strands of different lengths together with SybrGreen. A PCR was performed inside the capsules and the success was detected and quantified using fluorescence spectroscopy. Furthermore an oligo-nucleotide, labelled with fluorescent dye, was encapsulated in PBCA capsules and the cell uptake was analysed using FACS and cLSM. For a targeted release at the desired site of action (active targeting), different polymeric nanocapsules could be functionalized in two different ways using folic acid. This underlines the nanocapsules’ potential as biotransporters. Additionally, differently surface functionalized polystyrene nanoparticles (-COOH, -NH2, -SO3H) were synthesized by radical co-polymerization using the direct miniemulsion technique. The PS-nanoparticles were then characterized in terms of size, size distribution, morphology and surface charge via DLS, REM and PCD. Subsequently the protein BSA was adsorbed to the nanoparticles and the adsorption behaviour was analyzed using isothermal titration calorimetry (ITC). Stoichiometry (N), binding affinity (Ka) and degree of coverage (Theta) were calculated out of the ITC enthalpy measurements.