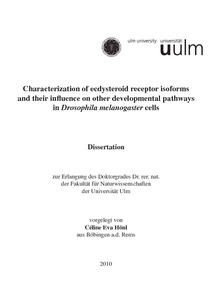 Ecdysteroids are molting hormones that influence and control processes like development, molting or reproduction in insects. Ecdysteroid action is mediated via a nuclear receptor heterodimer which is comprised of the ecdysteroid receptor (EcR) and ultraspiracle (Usp). In the present work, a Drososphila melanogaster cell line (S2/H) was used, containing only a negligible amount of endogenous EcR, but expressing the heterodimerization partner Usp. This offers the opportunity to study the ecdysteroid signaling with special focus on the three Drosophila melanogaster EcR isoforms within an insect specific environment. It was shown that in the presence of Usp, localization of the EcR isoforms is independent of the cell type. The localization of Usp differed from results obtained in vertebrate cells as in insect cells Usp was distributed between cytoplasm and nucleus in the absence of hormone. Transcriptional activity of the EcR isoforms is both isoforms-specific and cell type-specific. It was shown that the unliganded receptor complex can also have repressive functions. The point mutation K497E within the LBD of EcR also exerted isoform-specific effects as basal as well as hormone-induced transcriptional activity were increased for EcRK497E, supporting its function as a corepressor binding site. Deletion of the DBD of Usp decreased transcriptional activity isoform-specifically. Moreover, ecydsteroid signaling was studied for its interaction with three different pathways. An interplay between ecdysone and juvenile hormone signaling was shown. Expression of the EcR isoforms in S2/H cells lead to an altered expression of the two major signal-transducing proteins of the toll pathway dorsal and relish, demonstrating that ecdysone signaling is involved in cell differentiation. Concerning cell proliferation however, no interaction between ecdysone and insulin signaling could be determined in the present study.