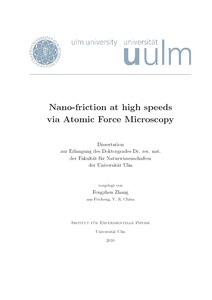 Several studies have shown that friction and wear properties are the limiting factors to the performance and the reliability of nanoelectromechanical systems (NEMS). In reality, many NEMS devices work at high sliding speeds (m/s), e.g. the I/O-head of a hard disk. However, due to the limitation of the piezoelectric driving stage, the maximum sliding velocity we can get by using a conventional AFM is less than 1 mm/s. Therefore, the study of the nanotribology at relative high speeds requires an alternative approach. Because of the piezoelectric effect, quartz crystal resonators have been widely used in research. By studying the impedance as a function of the cycling frequency, one can determine the resonance frequency. However, the measurements of the oscillation amplitudes are not as easy as that of the resonance frequencies, because the amplitude is unique for each piezo, dependent on the oscillation frequency and the applied voltage. Laserinterferometric vibrometry is a classical method to detect mechanical vibrations. Such a method is ideal for thickness oscillations but not for shear oscillation. Therefore, we designed a setup to measure shear oscillation amplitudes under high resonance frequencies. With the new laser apparatus we can successfully measure the oscillation amplitude at the edge of the electrode on a quartz crystal with a resolution of 2 pm at MHz frequencies. Yet, this method is not apt for measuring oscillations at the center of the electrode. In this thesis, we will present how to directly measure the oscillation amplitude of a quartz crystal via AFM and perform friction measurements at the same time. As the oscillation speed at the center of the quartz crystal is up to 4 m/s, friction measurements under high speeds are achieved with the modified setup.