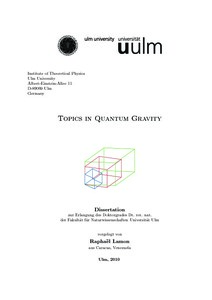 The first part of this thesis deals with a generalization of loop quantum cosmology (LQC) to toroidal topologies. First the general concepts of closed topologies is introduced with special emphasis on Thurston’s theorem and its consequences. It will be shown that new degrees of freedom called Teichmueller parameters come into play and their dynamics can be described by a Hamiltonian. Several numerical solutions for a toroidal universe will be presented and discussed. Following the guidlines of LQG this dynamics will be rewritten using the Ashtekar variables and numerical solutions will be shown. However, in order to find a suitable Hilbert space a canonical transformation must be performed. On the other hand this transformation makes the quantization of geometrical quantities less tractable such that two different ways will be presented. It will be shown that in both cases the spectrum of such geometrical operators depends on the initial value problem. Furthermore, we will succeed in solving the quantum Gauss constraint. In the second part of the thesis we will introduce some aspects of phenomenological quantum gravity and their possible detectable signatures. One possibility is an energy-dependent speed of light arising from a quantized space such that the propagation time of two photons differs. Gamma-ray bursts (GRB) are ideal candidates as they are short but very luminous bursts of gamma-rays taking place at distances billions of light-years away. We shall study GRBs detected by the European satellite INTEGRAL and develop a new method to analyze unbinned data. Then we shall study the sensibility of NASA’s new satellite Fermi Gamma-ray Space Telescope and conclude that it is well suited to detect corrections. This prediction has just been confirmed when Fermi detected a very energetic photon emanating from GRB 090510 which highly constrains models with linear corrections to the speed of light.