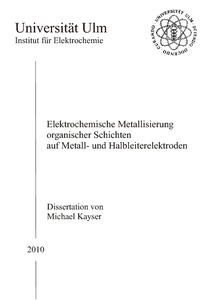 Subject of this work was the electrochemical metallization of organic layers on Au(111)- and n-Si(111)-electrodes. By self-assembly of thiols on Au(111) and grafting of 1-alkenes on n-Si(111):H omega-functionalized SAMs were prepared. The SAM molecules served as immobilized ligands whose end groups acted as active sites for the complexation of metal ions at the solution side of the interface. The separately conducted electrochemical reduction of the coordinatively bound metal ions in a metal-ion free electrolyte yielded metallic islands of monoatomic height atop of the SAMs of whose zero-valent state was confirmed by XPS. The aggregation of islands implies the leaving of the complexation sites and surface diffusion. By this process the donor atoms not covered by metal islands became again available for complexation. The retrieve of vacant coordination sites after each reduction allowed an increase of the metal coverage beyond the amount predetermined by the number of coordination sites up to Theta = 0.9 by consecutive cycles of complexation and reduction which were accompanied by a transition from Frank-van der Merwe to Volmer-Weber growth mode. The modification of the n-Si(111):H surface by covalently attached organic molecules was done by grafting of 4-vinylpyridine via thermally activated hydrosilylation. The modified n-Si(111) surface showed clearly altered properties in the CV like a shift of Efb and a strong inhibition of the electrodeposition of Cu from electrolyte solution. STM investigations revealed islands lacking any long range order whose dimensions of 35×12 Å at a height of approximately 2 Å suggest the surface polymerization of five molecules each in horizontal orientation. After complexation of the Mez+ the electrochemical reduction in the CVs was superimposed by HER whereby only XPS investigations could verify the coordination of the metals. XPS confirmed the presence of 4-VPy via the signals of N 1s and C 1s core levels as well as of metallic species after complexation.