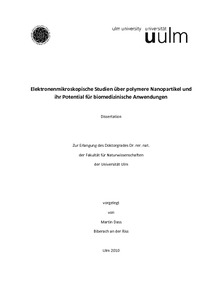 This work provides an insight into the high potential of polymeric nanoparticles for biomedical applications. Cellular uptake studies of polymeric nanoparticles indicate an increase of internalisation of particles with diameters of 100 - 200 nm. The cell reacts with an endocytotic process. All particles were surrounded by a membrane and transported intracellular in endosomes. The amount of particles per endosome mainly depends on the polymer type. Polyisoprene (PI) and polybutylcyanacrylate (PBCA) were internalised as single particles while polystyrene particles (PS) were internalised mainly in groups. Poly-(L-lactide) particles (PLLA) were internalised singular as well as in groups. Particles were internalised faster, when they have a surface charge. A comparison of used surfactants showed a significant effect. Non-ionic surfactants like Lutensol AT50 or anionic surfactants like SDS induce no toxic effects. If there was a cationic surfactant used, the cellular ultra structure changes dramatically after particle incubation. Many vesicles were formed and organelles were altered or displaced. In the special case of polybutylcyanacrylate morphological changes in the cellular ultra structure indicates toxic effects. The results lead to the conclusion that PBCA should not be used to overcome the blood-brain barrier however chemotherapeutic applications in cancer treatment should be favoured. PLLA-particles are ideal drug delivery systems according to these studies. Particles were internalised by cells very well and did not change the cellular ultra structure. PI- and PS-particles can be used as model systems or markers. The coupling of phosphonate at the surface of polystyrene particles was illustrated by analytical transmission electron microscopy. Studies on polyurethane capsules confirm the efficient synthesis process. Encapsulated SPIO particles were detected in the shell of the capsule whereas gadolinium complexes were homogeneously distributed inside of capsules.