Vibrational anharmonicity of adsorbates on surfaces 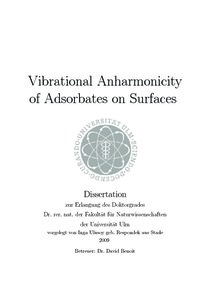 A methodology for the calculation of anharmonic vibrational frequencies of adsorbates on surfaces is developed. The theoretical method which is used for the description of the vibrational dynamics is the VSCF (vibrational self-consistent field) method. The potential energy surface is computed in a modified fast-VSCF approach which yields a general and system-independent scheme for the calculation of anharmonic vibrational frequencies for large molecules; the method is not restricted to the application on adsorbed systems. The first application of the methodology deals with acetylene adsorbed at a copper surface (Cu(100)). A number of different density-functional approximations are tested on this system to evaluate the accuracy with which the density functional approximations describe the PES. Furthermore, we analyze the copper-carbon bond which is formed during the chemisorption between substrate and adsorbate. The second application is on 4-mercaptopyridine adsorbed on the gold surface (Au(111)). Here, differences between different adsorption sites are investigated. Furthermore, in an experimental-theoretical collaboration with experimentalists from the Institute of Solid State Physics of Ulm University, an experimental inelastic tunneling spectrum is analyzed. The theoretical intensities are calculated, and normal-mode vibrations of the molecule are assigned to experimental transition frequencies. An attempt is made to determine the experimental adsorption site.