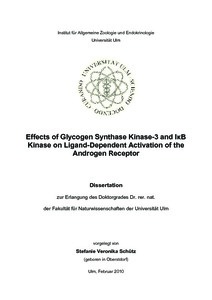 As PCa is one of the most serious diseases in elderly man, current research focuses on the development of effective new therapies for PCa. Although most patients suffering from PCa initially respond to androgen withdrawal therapy, PCa almost invariably progresses to a hormone refractory state of the disease within 18 - 24 months. In recent years, it has become obvious that cell growth and survival of HRPCa largely depend on the cellular content of the AR protein as well as on AR function. Alterations in the AR protein, AR expression, and/or AR activity by protein kinases are some of the most common factors leading to hormone-independent PCa. The present work highlights important roles of the protein kinases glycogen GSK-3 and IKK in AR signalling of PCa cells. Both kinases have been shown to modulate AR transactivation and AR phosphorylation. In addition, GSK-3 and IKK are both involved directly or indirectly in PCa cell proliferation and survival. In contrast to IKK, a special feature of GSK-3 is the control of AR localisation, thereby influencing the intracellular fate of the AR protein. On many occasions, pharmacological inhibition of serine/threonine kinases has been shown to have a negative impact on AR signalling. Although, inhibition of GSK-3 as well as IKK downregulates AR transactivation, both kinases affect different levels of AR signalling. Therefore, GSK-3 and IKK inhibitors have potential future roles as therapeutic agents in the treatment of PCa. Some GSK-3 inhibitors have successfully entered clinical trials, showing low cytotoxic side-effects in the treatment of type II diabetes or neurological malignancies, such as Alzheimer’s disease and bipolar disorders. Based on our results, GSK-3 inhibitors appear to be the most promising compounds for the treatment of PCa in the near future.