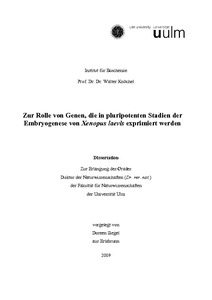 One of the factors required for the maintenance of pluripotency, characterized by self-renewal and their ability to form all types of tissues, is the mammalian Oct3/4, a member of the POU-V family of transcription factors. Starting with the primary induction of differentiation, pluripotency factors become downregulated and their lose cells are determined to differentiate into distinct tissues. In Xenopus, three members of the POU-V family, Oct25, Oct60 and Oct91, have been identified, which show a pluripotency related expression. They are able to suppress formation of esendoderm by antagonizing two key players in the hierarchy of factors that are required for induction and patterning of mesendoderm in Xenopus embryogenesis, VegT and Beta-Catenin, by the formation of repression complexes. Thereby, POU-V factors maintain the undifferentiated state of embryonic cells in preventing them from premature differentiation. Another set of genes expressed in pluripotent ES-cells are designated as developmental pluripotency associated genes (Dppa). This work describes the first characterization of a Xenopus gene, XDppa2/4, that is homologous to mammalian Dppa2 and Dppa4. XDppa2/4 protein contains a DNA-binding SAP domain and a conserved but not yet characterized Dppa C-terminal conserved region (DCR). The expression of XDppa2/4 in Xenopus correlates to that of other known pluripotency factors. Ectopic expression of wildtype and mutant XDppa2/4 as well as knockdown studies revealed the role of this gene in early embryonic development of Xenopus. While phenotypic variations observed during gastrulation until the end of neurulation are exclusively caused by the conserved C-terminal region, the SAP domain is presumably required for epigenetic modifications being indispensable for embryonic survival at later stages.