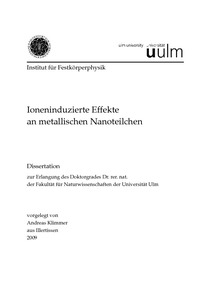 Ion irradiation of metallic nanoparticles (Au, Pt, FePt) on various substrates (SiO2, Si, sapphire) is presented. Nanoparticles were prepared by using inverse micelles of diblock-copolymers as templates. Thus particle diameters can be tuned within the range of 2 - 15 nm with a sharp size distribution and large inter-particle distances (20 - 140 nm), allowing to study effects of ion irradiation in detail with respect to particle size. Irradiations were performed with inert gas ions (Ar, Xe, He) with energies of 200 keV. Experimental analysis was performed using atomic force microscopy (AFM), scanning electron microscopy (SEM) and transmission electron microscopy (TEM). First, experimental results proof that sputtering plays a significant role in ion irradiation of nanoparticles on sapphire, leading to a decrease in particle size with increasing ion fluence. Within this work, experimental data can be described by a constant sputtering yield as well as by a yield depending on the square of the particle radius, so that a size-dependent sputtering yield - as suggested by Järvi et al. [EPL 82, 26002 (2008)] - can neither be confirmed nor denied in general. The main part of this work deals with ion-induced burrowing of metallic nanoparticles into SiO2-substrates, confirming the model of Hu et al. [J. Appl. Phys. 92, 3995 (2002)], which explains this effect through thermodynamic capillary forces in combination with ion-induced viscous flow of the substrate. This model has to be extended by also considering sputtering effects, resulting in a significant improvement in description of the experimental data. In addition, analysis of particle ensembles with different initial particle sizes requires a size dependent sputtering yield to fit the experimental data. In combination with Si substrates, ion beam mixing also has a significant effect on the irradiation of Au nanoparticles, leading to the destruction of particles and resulting in an amorphous Au/Si phase.