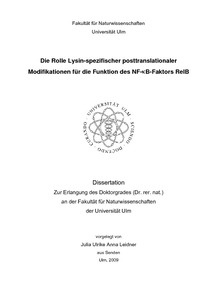 The NF-kappaB-transcription factor RelB plays an important role during the development of lymphatic tissues, for the inflammatory response and during tumorigenesis. RelB acts as a key component of the alternative NF-kappaB signalling pathway. However, RelB also modulates the classical NF-kappaB signalling pathway by acting as transcriptional activator and repressor. Until now, the molecular mechanisms underlying this functional diversity are largely unknown. Yet, the previously described proteasomal RelB-degradation in activated T cells represents one mechanism for the regulation of RelB. Therefore, one aim of this dissertation was to prove the involvement of the degradation-inducing Lys48-linked ubiquitinylation within the process of RelB-degradation. Indeed, the inducible RelB-degradation was accompanied by an increasing polyubiquitinylation. Furthermore, a basal non-proteasomal ubiquitinylation of RelB was observed that could be linked to an increase of the transcriptional activity of RelB. The molecular mechanism underlying this positive ubiquitin-effect could not be solved completely, yet the obtained results point to alterations in cofactor-interactions by the ubiquitinylated RelB. The SUMOylation is another lysine-specific posttranslational modification that is able to affect cofactor-interactions and to antagonize the ubiquitinylation. Indeed, RelB-modifications by SUMO were observed. Functionally, the SUMOylation seems to antagonize RelB-ubiquitinylation as it appears to have a negative effect on RelB activity. In summary, the presented results display a new mechanism for regulating the transcriptional activity of RelB by ubiquitinylation and SUMOylation, which is unique among the NF-kappaB family.