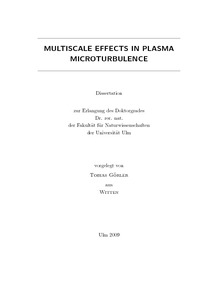 Microinstabilities are one of the key physics problems on the way to efficient nuclear fusion power plants. They cause anomalous heat and particle transport which significantly degrades the plasma confinement, thus preventing self-sustaining plasma burning in present-day experiments. Due to their complex dynamics and highly nonlinear character, the underlying equations can only be solved numerically, and corresponding computations would not be feasible if all involved space and time scales were to be considered. However, in this context, multiscale approaches allow for a reduction to the relevant domain of interest and are used in the plasma turbulence code GENE. The latter numerically solves the gyrokinetic Vlasov-Maxwell system of equations and has been significantly extended during this thesis project by relaxing the local approximation in the radial direction. An important application of the code is the investigation of coupled microturbulence on different space and time scales which are not affected by the gyrokinetic approximation. Traditionally, much of the heat transport and thus the confinement degradation in fusion experiments is attributed to microturbulence with wavelengths of the order of the ion gyroradius. However, several recent theoretical and experimental findings indicate significant contributions originating from the considerably smaller electron gyroradius scales and hence motivate simulations covering both ion and electron spatial and temporal scales self-consistently. It is found that for realistic ion heat flux levels and in the presence of unstable electron temperature gradient driven modes, there tends to be a scale separation between electron and ion thermal transport. In contrast to the latter, the former may exhibit substantial or even dominant small-scale contributions. Furthermore, it is investigated in which way this behavior is reflected in several experimentally accessible quantities, including frequency or density spectra.