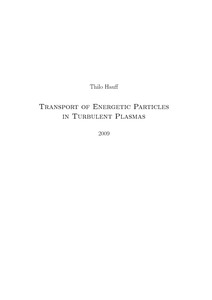 Anomalous transport in magnetically confined fusion plasmas is induced by electrostatic and magnetic turbulence on scales of the Larmor radii of the ions and electrons, and is responsible for the degradation of confinement, strongly complicating the process of achieving the necessary conditions to sustain a burning plasma. The quest to understand the turbulent transport of particles, momentum, and energy in magnetized plasmas remains a key challenge in nuclear fusion research. A basic issue being still relatively poorly understood is the turbulent advection of energetic particles with large drift orbits and gyroradii. Especially the interaction of fast alpha particles or `beam ions" with the background turbulence is of great interest. In this thesis, fast particles are treated as passive test particles, and the connection between decorrelation processes (Eulerian or Lagrangian) and the transition to a diffusive regime is shown to be crucial in describing transport processes. To allow for a better understanding of the dependence of the particle diffusivity on the interaction mechanisms between the particle trajectories on one hand and the spatio-temporal structure of a certain type of turbulence on the other hand, a three step approach is applied: Numerical studies with artificially created stream functions in simplified geometries are used alongside analytical models, which are eventually confirmed using self-consistent gyrokinetic simulations with the GENE code. Scaling laws are derived for a number of different regimes for electrostatic as well as magnetic turbulence, and it is found that the reduction of transport with increasing particle energy is much smaller than expected in the past. The turbulent transport of energetic particles is discussed as a candidate for explaining recent surprising experimental results obtained by the ASDEX Upgrade experiment, finding that the models are able to explain the observations.