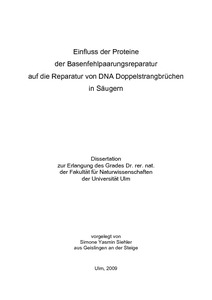 The human MMR proteins are components of the post-replicative MMR machinery. In procaryotic and lower eucaryotic DSB repair processes MutS and MutL are known to repress exchange between short stretches of homology. Furthermore in yeast the proteins MSH2, MSH3, MSH6, MLH1 and PMS1 are critically important for fidelity control of HR. In this study the importance of the MMR system for mammalian DSB repair was defined. Analyses of the DSB repair pathways revealed stimulation of the homology-directed DSB repair pathway. This type of regulation needs MutS complexes. The activation of the homology-directed repair via the MutS complexes was independent of hRad51. The stimulation of homology-directed repair by MutS complexes required hRad52. The hMutL status modulated conservative but not non-conservative homologous recombination mechanisms. The most pronounced influence on HR was detected for processes involving short stretches of sequence homology. This suggests for fidelity control functions of the MutL-complexes during homologous recombination. This effect was still detectable after loss of hMSH2. The function of hMutL was neither fully dependent on ATM nor p53, BLM or Bach1. However, upon loss of both ATM and ATR the hMutL-dependent effect on HR was lost. Nevertheless, quantitative differences were observed with or without BLM and Bach1. It is conceivable that hMutL complexes play a role in regulating homologous recombination via ATM/ATR-BLM, ATM/ATR-Bach1 and possibly other ATM/ATR-mediated signalling pathways. Altogether, a fidelity control function of hMutL complexes during homologous recombination independently of mismatch repair was demonstrated for the first time. Furthermore, it was firstly demonstrated that hMutS complexes activate non-conservative homology-directed DSB repair processes.