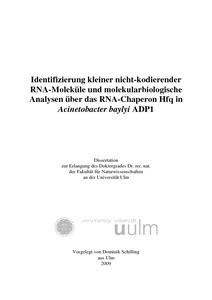 Hfq is a conserved bacterial RNA-chaperone. In gamma-proteobacteria Hfq shows a great variation in its C-terminus. Extremely large Hfq proteins (200 amino acids) are found within the gamma-proteobacterial family Moraxellaceae. The difference in size compared to other Hfq proteins is due to a glycine-rich domain near the C-terminal end of the protein. The soil bacterium Acinetobacter baylyi, a member of the Moraxellaceae, encodes a 174 amino acid large Hfq homologue containing the unique and repetitive amino acid pattern GGGFGGQ within the glycine-rich domain. Despite this C-terminal extension, A. baylyi Hfq complemented an hfq E. coli mutant in vivo. The detected A. baylyi Hfq corresponds to its annotated size, indicating expression and stability of the full protein. Deletion of the complete A. baylyi hfq open reading frame resulted in severe reduction of growth. Additionally, deletion and over-expression of Hfq were accompanied by the loss of cell chain assembly. The glycine-rich domain was not responsible for growth and cell phenotypes. A search for novel small non-coding RNAs (sRNAs) in A. baylyi intergenic regions was performed by a biocomputational screening. Small RNAs are key players in prokaryotic metabolic circuits, allowing the cell to adapt to changing environmental conditions. Their interference is often facilitated by Hfq. One candidate, Aar, encoded between trpS and sucD showed Hfq-dependency in the case of hfq deletion in Northern blot analysis. Aar was first expressed strongly at stationary growth phase in minimal medium and at exponential growth phase in complex medium. Over-expression of Aar did not affect bacterial growth. But 8 mRNA targets, predicted by two in silico approaches, were upregulated in stationary growth phase. All 8 mRNAs are involved in A. baylyi amino acid metabolism. A putative binding site for Lrp, a global regulator of branch-chained amino acids, was observed within aar. Both facts imply an Aar participation in amino acid metabolism.