The past and the future of mortality 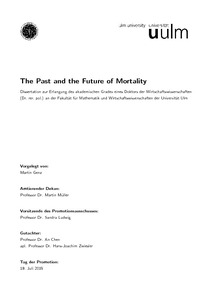 A variety of literature addresses the question of how the age distribution of deaths changes over time as life expectancy increases. However, corresponding terms such as extension, compression, or rectangularization are sometimes deﬁned only vaguely, and statistics used to detect certain scenarios can be misleading. The matter is further complicated because mixed scenarios can prevail, and the considered age range can have an impact on observed mortality patterns. In this thesis, we establish a unique classiﬁcation framework for realized mortality scenarios that allows for the detection of both pure and mixed scenarios. The framework not only can test the presence of a particular scenario but also can assign a unique scenario to any observed mortality evolution. Furthermore, it can detect diﬀerent mortality scenarios for diﬀerent age ranges in the same population. We apply the framework to mortality data for diﬀerent countries all over the world, both sexes, and different age ranges. This yields a complete picture of historical mortality evolution patterns in those countries and adds to existing analyses where only certain aspects of mortality evolution patterns have been considered. We discuss similarities and diﬀerences in the historical mortality evolution patterns between diﬀerent populations, sexes, and age ranges. We particularly focus on the estimation of the right endpoint of the distribution of human lifetimes and apply methods of the extreme value theory for the estimation of this age. To this end we use combined mortality data from two different sources of mortality data. The use of old-age mortality data typically raises two issues: sparse information on the old ages and censored observations. We address this by combining methods of the censored extreme value theory with sub-sampling and cross-validation techniques. To project future mortality a variety of mortality models can be used. However, the parameters of most of these models lack a clear demographic interpretation. On the other hand, demographers make predictions on future mortality but typically focus on single aspects only instead of comprehensive mortality forecasts. The final part of this thesis aims to close the gap between these forecasting approaches. To this end, we establish a new best estimate mortality model which is based on the extrapolation of the four statistics of the classification framework we present in the first part of this thesis. We show that our model yields forecasts for the deaths curve which are consistent with the most recent demographic trends in the deaths curve evolution. Moreover, expert opinions on future trends in the mortality evolution can easily be incorporated, and we illustrate how the model can be used for scenario analyses.